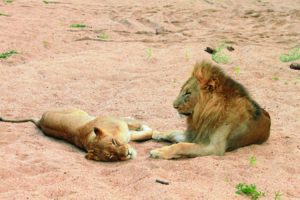 Long Island’s CEOs are a talented group – from writers to musicians to painters, this is one accomplished, creative cohort.  Adelphi University President Robert Scott is a prime example.  I recently previewed a show of his photography at the Great Neck Arts Council and was truly blown away.

Bob’s photographs of both his recent trip to Mala Mala in South Africa and a stay last summer in East Hampton, were remarkable and compelling moments captured through the art of photography.  It was hard to pick a favorite – was it the East Hampton view of a lone woman distanced by seemingly endless sand or the jaguar, almost kitten-like, sharpening its claws on a jungle tree, or the vulture peering menacingly at the camera?

This compelling exhibit made me wonder why some people succeed and even excel in numerous unrelated areas, while others seem more narrowly focused.  It isn’t just about intelligence – legions of brilliant people can’t seem to cross that line from their primary interest to anything else. Those who do venture into new areas seem to be happier people, perhaps because they have an outlet to express their inner voices.

But, what makes a university president an extraordinary photographer or a movie star a acclaimed painter?  Is it a passion for life – the ability to keep a mental door open for new experiences and the willingness to take risks of failure in new areas? Or, is it just a habit they develop to challenge themselves again and again to excel in new areas.

As a child, the bar is raised for you – make the team, earn high marks, and be selected by a college.  As an adult, no one else really raises the bar and for most of us it’s easier to stay in our success “comfort zone.” I’ve often thought that one of the most important lessons we can give our children is to raise their own bar to become better at what they do and to work at new talents or achievements, throughout their lives.  I think our children would benefit from learning to jump to a higher level of success – not for money, power or recognition – but simply for the satisfaction of achievement.

Robert A. Scott’s exhibit at the Great Neck Arts Center is being shown from October 16th through December 4th.  It is one of two exhibits this fall of Bob Scott’s photography, the other in NYC.